Utilities and Services in Thrissur 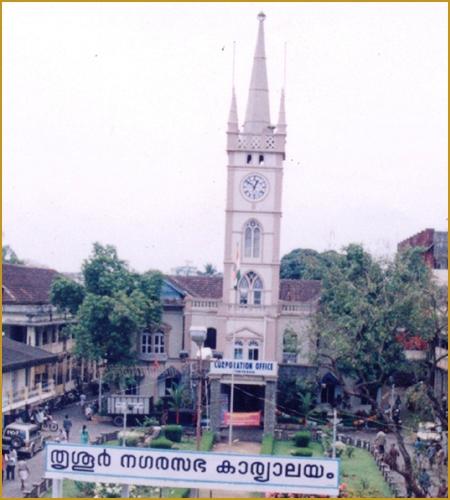 The Mayor is the leader elected from among the Councilors. The Council is comprised of the Councilors under the Chairmanship of the Mayor who oversees the conducts of all the administrative functions of the Municipal Corporation. The Council also constitutes a standing committee for discharging the duties and functions besides the exercise of the salient powers of the Corporation. Besides the Mayor, there is a Deputy Mayor who is also designated as the Chairman of the standing Committee on Finance. Along with the elected representative in the Council the Secretary of the Municipal Corporation is an Officer who is directly given this appointment.

The Thrissur Municipal Corporation has laid out certain utilities and services for its citizens. These are delivered by a well organized sanitation Department that has a concretized mission to provide sanitation to all. This would enable the citizen to lead a hygienic and healthy life.

The sanitation personnel have taken up the task of bringing about an attitudinal change in the mindset of the people as that they are oriented towards the maintenance all around. Along with working with the people, the Department is conducting the implementation of a scientifically managed and conducted solid waste management system.

For generating awareness on its various programmes, the sanitation Department creates and conducts several camps on imparting Information, Education and Communication on various aspects of the Campaign on environmental sanitation. The sanitation officers in charge of the various targeted programmes are:- Total sanitation campaign Samithi Chairman is Ambadu Venu or the District Panchayat Coordinator.

Thrissur city has an amalgamation of the old and new forms waste of management being practiced simultaneously in innovative programmes. There are nine bio-gas plants set up in Thrissur. These are located at Ayyanthole, Aranattukara, Olarikara, Anappara, West Fort, Mannuthy, Cheerachi and Ollur. On the modern technology front the city has initiated the process for commissioning an organic waste converter treatment plant.

Thrissur is virtually the cradle of the print media with the very first Malayalam newspaper taking form in 1920 under the flag most of ‘Lokmanya’. Later emerged the V K Krishnan Ezhuthachan edited, ’Deenbandhu’. In 1941 was born the ‘Ezhuthachan’ or the periodical that spearheaded the freedom movement. Thus, from 1920 to 1944 was the mushrooming of a number of newspapers like the ‘Lokmanya’, the ‘Kerala Chintamani’, ‘Kerala Kesari’, ‘Mahatma’, ‘Gomathy’, ‘Navajeevan’ and ‘The Express’. Some of the major Malayalam dailies emanating from Thrissur are the Malayalam Manorama, the Mathrubhumi, the Madhyame, the Deepika, the Manglam, the Veekshanam, the metro Vaartha and the Janayugom. In Thrissur, other languages newspapers also flourished along with evening newspapers.

In celluloid media, Thrissur saw its first cinema hall opened by Jose Katookkaran in 1907 using a manually operated projector. Later on in 1913 the electrically operated projector was inaugurated and history was made. The Jose Threatre exists till date. Today, however, there is a whole galaxy of theatres available in the city. The names of the more prominent ones are Ragam, Ramdas, Girija, Kairali, Sree, Jose, Bindhu and Swapna.

The telecom and radio services are also of an exemplary quality with the All India Radio the commissioning its first transmitter in 1956.

There are some of the best courier and cargo services available in Thrissur. The booming economy of the city has promoted these services as there is frequent influx of tourists.
Addresses and contact numbers:-

Thrissur has some of the most advanced banking systems because of its deep rooted ‘kuri’ or chit fund based financial mechanisms. Some of the prominent banks of the region are listed as:-