Being one of the major cultural centres in India, Thrissur has rightfully earned the sobriquet “Cultural Capital of India”. It is adorned with numerous temples, mosques, churches and other architectural wonders. Culture and art are woven intricately in the lives of the society and is well reflected in the spectacular festivals that are celebrated here. 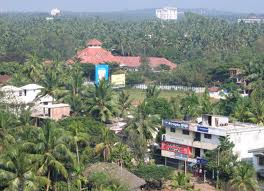 A peaceful and beautiful place in Kerala, Kozhikode lies away from the fast moving, noisy metropolitan cities. It is no less than heaven for all those who love nature. Also, it is a hub for the Indian spices. It is the third largest city in the south Indian state of Kerala and is also known by the name Calicut. It is known for its classy history and has attracted people from far and wide for the love of spices and cotton cloth. It has experienced rule of many kings and was once under the control of Portuguese and Arabs before it became a part of the British Empire. Some of the most visited places in Kozhikode include Ettumanoor Shiva Temple, Mishkal Mosque, Lalitha Kala Academy, Sulthan Bathery and Thiruvannur Temple, etc. There are many traditional products such as soft cotton cloth and handicrafts made out of rosewood and sandalwood.

It is situated at a distance of 112 km from Thrissur and is well connected via the road and rail with major cities in India. Highway numbers 212, 213 and 17 connect this small city to various metro cities in Kerala. All the roads are well maintained and, thus, add convenience to all those people who are travelling from Thrissur to Kozhikode by road. You can reach Kozhikode in 2 hours 40 minutes from Thrissur.

Alleppey or more commonly known as Alappuzha in Malayalam, is also known as “The Venice of the East” as it’s beautiful collection of beaches, backwaters, lagoons and canals come shaded by swinging coconut trees. They all criss-cross each other throughout the city. It is easy to get along this place on foot and explore the various places including the prawn farming, Chinese fishing nets and coir manufacturing etc. Some of the important tourist destinations include Alleppey Beach, Mullackal Bhagavathy Temple, Nehru Trophy boat race and coir manufacturing process. One can shop for various items ranging from coconut oil, pepper, cardamom, coir carpets, sugar and areca nut etc.

From Thrissur, it is located at a distance of 143 km and can be reached in 2 hours 20 minutes by cab or taxi. It is well connected to major cities by road and travelling by road is a pleasant experience as one can enjoy the greenery of the surrounding areas.

Kochi, also known as the “Queen of the Arabian Sea” exhibits the amazing blend of the diversity of modern India and the colonial past. Some of the most visited attractions of Kochi include Mattanchery’s Dutch Palace which was built by the Portuguese exhibiting the marvelous murals displaying episodes from the famous Indian epics. Another one is the St Francis Church which is the oldest church in India being built in the 16th century. When talking about Kochi, mention of the Chinese fishing nets cannot be left out. The other tourist attractions include Aranmula Temple, Chendamangalam Fort, Gundu Island, Pallipuram Fort, Pareekshith Thampuran Museum and Santa Cruz Basilica etc. You can shop for a range of products made out of wood, coir, bamboo, brass, shells, sandalwood and ivory etc.

It is situated at a distance of 50 km from Thrissur and can be reached in around 1 hour 40 minutes when one travels by a private cab or a taxi. There are many private as well as state bus operators (KSRTC) that offer pocket friendly travel offers.

Nature’s pristine beauty can be experienced at Munnar, the tea garden hill station in south state of Kerala. Exotic species of flora and fauna, expansive tea plantations, and the aroma of spice in the air will surely captivate your senses. It is known to offer an ethereal effect only once in every twelve years when the entire mountain is covered in alluring blue color as Neelakurinji plant blooms then. The tea gardens are the foremost attractions in Munnar along with the Echo Point, Tata Tea Museum, Elephant Lake, CSI Church, Mattupetty Dam, Eravikulam National Park and Top Station etc.

It is located at a distance of around 149 km from Thrissur and you can reach here in 3 hours 15 minutes if you travel by a private taxi or a cab. It is connected with other cities of the country via National Highway number 85 which is very well maintained. Jeeps, private buses and private vehicles can be used to reach Munnar.

Kumarakom has been compared to paradise and is visited by those who wish to take a break from the regular humdrum of life. You can hire a houseboat to cruise down the backwaters and enjoy lush greenery all around. The mangrove, swaying coconut palms and water that is all pervading offers a mesmerizing effect on the travelers. A delight for the travelers and bird watchers alike is the Kumarakom Bird Sanctuary that is spread in almost 14 acres. The other tourist attractions include Aruvikkuzhi Waterfall, Juma Masjid, Vembanad Lake, Kumarakom Beach etc.

Kumarakom is located at a distance of 124 km from Thrissur and can be reached in around 2 hours 20 minutes when travelling by road. There are many private and state run buses available that will offer cheap yet comfortable travel.

Malappuram, located between the Lakshadweep Sea and Nilgiri Hills, attracts tourists for its small hills, amazing backwaters, palm fringed beaches, lush forests and wildlife. Known for its pristine natural beauty, Malappuram also has small rivers and streams flowing through the city which adds to its beauty only. Some of the most-visited tourist destinations in Malappuram include Anakkadavu Bridge, Kodungallur Temple, Malappura, Juma Masjid, Melmuri, Nava Mukand Temple, Kottakunnu, Nilambur and more. The best time to visit Malappuram is during the months of August to November.

It is located at a distance of 63 km from Thrissur and one can reach in around 1 hour 50 minutes by travelling via road. Private buses, state operated buses, taxis, cabs and privately owned vehicles can be used to cover this distance conveniently.

Formerly known as Palghat, Palakkad is a city that is located at the foothills of the Western Ghats. Its hills, evergreen forests, rivers, historical monuments, varied collection of flora and fauna along with religious places attracts tourists in large numbers. Apart from its natural beauty, this city is also visited for its ayurvedic treatment centers. The best time to visit Palakkad are through months of September to February. Some of the most important tourist destinations in Palakkad include Fantasy Park, Dhoni Hills, Anchu Vailakku, Jainimedu Jain Temple, Kollengode, Kannukottukavu Temple, Palakkad Fort, Sree Kurumbha Bhagavathy Temple etc. It is a shopaholics’ paradise as there are plenty of items available ranging from gold jewellery to Travancore sarees, utensils, traditional bells, peacock vilakkus and more.

It is located at a distance of 67 km from Thrissur and can be reached in 1 hour 10 minutes by road. One can hire a private taxi, cab or travel by state operated or private buses.