Thrissur is known as the ‘cultural capital of Kerala’ for more reasons than one. Its annual calendar is filled with festivals and events, both cultural and religious, which attract thousands of visitors to the town every year. 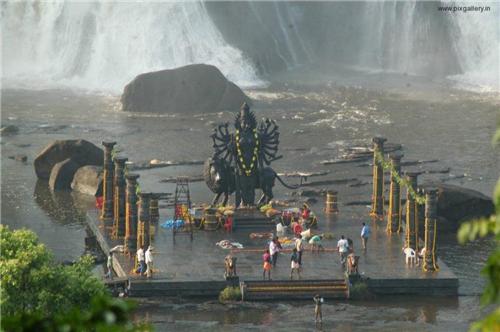 Its vibrant present goes hand-in-hand with the extraordinarily rich and glorious past that had a significant role in shaping the political history of Kerala and the entire South India. The principal architect of the present town is the famous Raja Rama Varma, popularly referred as ‘Sakthan Thampuran’.

Thrissur town has been given a distinct identity by the many architectural landmarks and monuments, churches and temples that dot this town. The fabric and veneer of the town are steeped in art, culture, literature and music.

Besides its foremost place as a historical and cultural centre, Thrissur offers beautiful insights into natural beauty and rich abundance of flora, fauna and natural resources.

Most of the tourist attractions in Thrissur can be covered in day trips. Some of these tourist destinations are featured in national and international tour itineraries and are very popular with Indians and foreign tourists. Besides these, there are many smaller places of local interest. Although not all of these places can be covered in a single day, trips can be charted out depending on localities and areas, distance and timings and convenience of tourists. It may need several days to see all of Thrissur’s tourist destinations because of the wide variety and the number of places to see which are listed below-

Cheraman Jum’ah Masjid
Believed to be the oldest mosque in India dating back to 629 AD when relations between the Malabar Coast of Kerala and the Arab world were very active and cordial. The mosque was built by Malik Ibn Dinar and Malik Ibn Habib in honour of the Chera King, Cheraman Perumal who converted to Islam on his visit to Arabia, hence the name Cheraman Mosque. An ancient oil lamp, said to be over thousand years old, burns continuously in the mosque and visitors from all religions flock her to say their prayers and receive blessings. The lamp is filled with oil brought by these visitors.

Cranganore Fort
Also known as Kodungallur Fort or Tipu’s Fort, this fort built in 1523 by the Portuguese later fell into Dutch hands in the 16th century before eventually being controlled by Tipu Sultan. Visitors to the fort today can only see the ruins of what was once a majestic fort with walls 18 feet thick.

Divine Retreat Centre, Chalakudy
About 30 kms from Thrissur, this religious centre began in Potta in 1950 as a renewal movement under the Vincentian Congregation founded by Vincent de Paul, as a ministry and relief centre for the sick and needy. Since then it has moved to a larger area in Chalakudy and is visited by thousands of people from all over the world as a retreat for prayer, rejuvenation and spirituality.

Kerala Kalamandalam
Situated on the banks of the Bharatapuzha River in Cheruthuruthy, Thrissur District, this arts and dance centre founded in 1930 by Vallathol Narayana Menon for teaching Kathakali and Mohiniattam, this centre is now a Deemed University of Art and Culture teaching traditional art and dance forms like Bharatanatyam, Koodiyattam, Nangiyar Koothu and Thullal besides training in percussion instruments like Chenda, Maddalam, Mizhavu, the traditional orchestral Panchavadyam and other local art forms.

Thekkinkadu Maidan
An oval-shaped maidan (open ground) in the heart of the town, it spans the entire span around the Vadakkunnathan Temple. This ground is actually a small hillock covered by dense forests in earlier days; now only a few teak trees exist. In olden days, Thekkinkadu was a dense teak forest which was inhabited by many species of animals and birds; it was the execution place for hardened criminals. The method of execution was by driving the criminals from one of the temple gates into the dense forest to be killed by the wild animals. It belongs to the Cochin Devaswom Board (CDB) and hosts the annual Pooram festival.

Thrissur Kole Wetlands
This large and highly productive wetland is threatened with extinction due to misuse of its resources. The Kole Wetlands produce nearly 40% of the state’s requirement of rice and is a natural water inflow and drainage system for the entire district. Migratory birds from other parts of Asia converge on the wetlands and the entire area is termed a ‘protected one’ under the Ramsar Convention on Wetlands signed in Iran in 1971 which recognizes the importance of wetlands around the world in terms of economic, ecological, cultural, recreational and scientific values.

Thrissur Zoo
Now referred to as the Thrissur Zoo and State Museum, a well maintained large area spread over an extent of 13.5 acres, the Thrissur Zoo houses many species of animals, birds and reptiles including some endangered and protected species. This zoo which opened to the public in 1885 is among the oldest in the country. Besides the animal enclosures and open areas that form part of the zoo, this area houses an Art Museum, a Botanical Garden, Natural .History Museum and a Zoological Museum. Open to visitors from 10 am to 6.30, the weekly holiday is Monday.

Vanchikulam
This freshwater lake in Thrissur town was a waterway in olden days linked to backwaters and canals between Ernakulam and Thrissur districts. With the advent of the Cochin Harbour Railway Line, the waterway sank into insignificance and is now a pale reminder of a glorious past.

Vilangan Hills
Known as the ‘Oxygen Jar of Thrissur’ II this laterite hill was used as a military base and an observatory camp providing a panoramic view of the city and wetlands and the sea beyond. The top of the hill is a flat area measuring around 5 acres of land housing a children’s park, an open air auditorium, club activities and a medicinal-herbal plants garden maintained by the Trekkers’ Club. Several pieces of art and sculpture dot the hill which is 80 metres above sea level. The hill is open to visitors from 7 am to 7 pm.

Thrissur also has a large variety of astoundingly beautiful and naturally scenic spots like backwaters, beaches, dams, waterfalls and wildlife sanctuaries. Notable among these segments are:

Chettuva Backwaters
Starting at Enamakkal Lake and emptying into the placid Arabian Sea, this stretch of backwaters is a declared ‘heritage village’ affording views of dense mangroves, fishing nets, an estuary, a fort, picturesque island filled with migratory birds and much more.

Chavakkad Beach
Abutting the coast along the Arabian Sea, this beach is a popular tourist destination but as yet unexplored and unspoilt. The Chavakkad Azhimukham (Estuary), where the Chettuva River flows into the Arabian Sea is a great tourist spot dotted with coconut lagoons.

Snehatheeram Beach
‘Snehatheeram’ or ‘love shore’ is a popular beach spot in Thrissur along the Arabian Sea and is easily one of the cleanest and well maintained beaches along the vast coastline.


Athirappilly Falls
Situated in Thrissur district and along the dense forests surrounding the inter-state highways connecting Tamil Nadu and Kerala, this mighty plume of water known as the ‘Niagara of India’ and is easily the ‘queen of Kerala’s natural wonders’. Athirappilly is the biggest waterfall of the Chalakudy River that originates in the Anamudis of the Western Ghat ranges and flows through the Vazhachal forest division, which is the second most bio-diverse area in the state, before reaching the Arabian Sea.

Peechi Vazhani Wildlife Sanctuary
This sanctuary which was established in 1958 is the second oldest in Kerala. It is headquartered in Peechi known for its dam and consists of the Palapilli and Nelliyampathi forest areas. Large herds of elephants are known to reside in the forest corridors.

How to Reach Thrissur

Road- Thrissur city is well connected with the nearby cities like Palakkad, Kochi and Coimbatore by the four lane National Highway 47. Private and state buses, auto-rickshaws, taxis and cycle-rickshaws provide comfortable commutation.

Rail- The city has four railway stations and the rail transport system is operated by the Southern Railway Zone of the Indian Railways.

Air- The city of Thrissur is served by the Cochin International Airport that is located at a distance of around 55 km. Apart from this, there is availability of Chartered Flights and Heli-taxi services also.

There are many places that are within the distance of 250 km from Thrissur city which are well connected to the city and offer relaxation and rejuvenation of body, mind and soul. Some of the places are Koavalam, Thekkady, Varkala, Thiruvananthapuram, Kannur and Tirur etc.