One of the most important temples in Thrissur is the Thiruvambadi Sri Krishna Temple, which is one of the forefront temples that takes part in the famous Thrissur Pooram festival. It is the last temple that leads the procession to the Vadakunathan Temple and put out an extravagant show of parades involving caparisoned elephants, colourful elephants and other such extravagant displays of festivities. 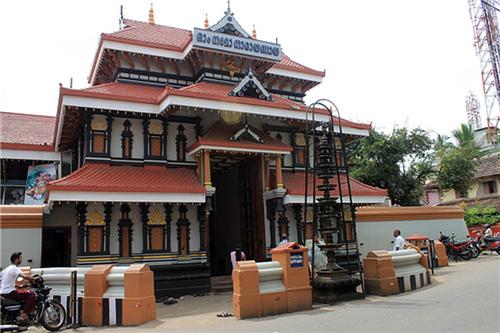 The resident god at the temple is Krishna, in his nascent avatar. There is also a dedicated place for the Goddess Bhagavati which is placed to the left side of the shrine that holds Lord Krishna.

There is a very interesting legend that is part of this temple folklore. It is believed that the idol of Lord Krishna that is present here was not always a part of the temple and in fact there wasn't one here at all. The idol actually lay fifteen kilometers away in another small town called Edakkalathur. The temple that contained the idol was in fact also known as Thiruvambady. All was swell at the town until wild communal violence started to grip the small town. That caused for some concerned townsmen to grab the idol and take it to a couple who were thought to have save hands. The couple happened to be great devotees of Lord Krishna and accepted the responsibility with open hands. They treated the idol as their own child and so impressed by their devotion and dedication was Lord Krishna that he assumed a different posture. To the surprise of the couple, Krishna now bore a flute in his hand and an extended other hand was meant to signify his acceptance of the butter that the couple regularly fed the idol. This is one of the most famous of idols in Thrissur.

There is another legend that is part of the temple's history. Its believed that the same couple was also big devotees of goddess Bhagavathy and regularly visited her temple in a nearby town. As years passed by and the couple started to grow older, they were unable to visit the temple anymore and that's when the goddess decided to travel with them to their place as she did not want to let go of an ardent devotee. That's why a pillar dedicated to the goddess is now part of the temple.

The best time to visit the temple is during the Pooram festival as an extravaganza of sound and colour are displayed year after year at the temple.