Thrissur is a home to numerous temples, both ancient and newly built. Most of them are visited by devotees and tourists from all parts of the world and hold huge religious value. 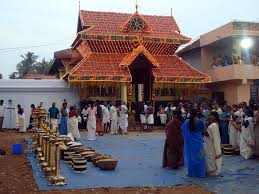 The fourth biggest in India in the number of devotees congregating for worship every day, Guruvayoor Temple where Lord Vishnu is worshipped in his avatar as Sri Krishna is considered the ‘Dwaraka of South India’ because the deity installed in the inner sanctum shows Krishna with four arms carrying the Pancajanya (conch), Sudarshana Chakra (discus), Kaumodaki (mace) and a Padma-Tulasi (Lotus with a holy basil garland). This is representative of the image revealed to Krishna’s parents Devaki and Vasudeva at the time of his birth. Guruvayoor is referred to as ‘Bhuloka Vaikuntam’, which means the ‘heavenly abode of Vishnu on earth’. The traditions of worship and puja conducted at this temple are followed as per guidelines stipulated by Adi Shankara, one of the ancient Hindu philosophers and theologians who consolidated the ‘Advaita Vedanta’ doctrine in the mid 7th century.

One of the biggest ‘Bhagavati’ temples in Kerala, one of two groups participating in the annual Pooram Festival. In Hindu tradition, ‘Bhagavati’ refers to the feminine aspect of the divine or ‘Devi’, in relation to the masculine ‘Deva’. Devi or Durga is the Supreme being in the “Shaktism” tradition of Hinduism. In Vaishnavism and Shaivism, Devi symbolises Lakshmi or the consort of Vishnu and Parvati-Shakti, the consort of Shiva.

This temple has Lord Krishna as the presiding deity and is one of the rival groups participating in the annual Pooram Festival.

Dedicated to the worship of Lord Shiva, this magnificent is one of the most ancient in the state and an astounding example of Kerala architecture that has stood the test of time. It is also a rich treasure house of ancient art pieces, wooden carvings and wall paintings that have huge historical and archaeological significance. The ‘Pooram Festival’, an annual festival is the main attraction of the Vadakkunnathan Temple and is celebrated in the summer months of April-May each year.

Other temples, equally popular and considered as tourist attractions around Thrissur area are: