The St.Thomas Syro-Malabar Church in Palayur in Thrissur is perhaps the most significant spot in the history of Christianity in India. The importance of the church is of such an order that the town of Payalur derives all its fame from the presence of the St. Thomas Church in its vicinity. Moreover, Payalur is considered an important pilgrimage destination for national and international Christian Catholics. 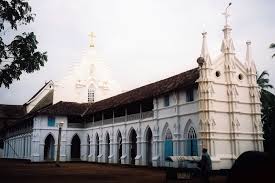 Historical Significance and Legend Associated with the Church – St. Thomas, the “Apostle of India”

The arrival of Apostle St.Thomas in Kerala was an event of such deep religious and historical significance, that is was acknowledged by the Indian Postal Service’s 2 stamps that were brought out in the years 1964 and 1973 respectively. The Payalur St.Thomas Church is the oldest Christian church in the Indian subcontinent, and also one of the most influential, as this church is believed to be one of the 7 churches to have been established by St. Thomas, reverently called the “Apostle of India” himself, and this is where he first began to convert people to the faith of Christianity in 52 A.D. Although this church is one of the total of seven churches established by the Apostle for the evangelised natives, it stands out from the rest in that it is the only one to have stood the test of time – over two thousand years – to continue to exist in its native place where St. Thomas originally established it.

Today, however, the Palayur Church is a far grander structure than what it used to be in 52 AD. It was in the early decades of the seventeenth century that the Italian Jesuit sought permission from the ecclesiastical authorities to construct a more convenient church around the existing old structure for the parish of Palayur. The indigenous small building of the church, nonetheless, is preserved in the facade of the new church.

There is a very interesting legend associated with St. Thomas’ coming to the western shore of Kerala. It is said that when he first set foot on the sands of Palayur, the Apostle was struck by the sight of a group of Brahmins offering prayers to the Sun God by the manner of holding up water in their palms and offering it to the God. He was amused to note, however, that the holy water they thought the Sun God was graciously accepting and acknowledging was all getting collected back in the tank itself and the priests were ignorant, consciously or unconsciously, of that fact. He proposed to the Brahmins that he could prove to them that he had a superior God, who shall bless him with acceptance of the water he throws up, unlike their God, and post witnessing that, they’ll be required to pledge to convert to Christianity. St. Thomas, thus, invoked God the Father, The Son, and the Holy Spirit and performed the magical miracle. This is how the first group of Indian Brahmins were baptized, and Christianity was introduced in the subcontinent.

The original altar consecrated by the Apostle was, however, destroyed during the invasion of Tipu Sultan in India.

At the sight of the St. Thomas Church, evidence is found of the existence of historical Hindu and Jewish temples. Remnants of Hindu idols and Jewish synagogues have been discovered around the time of its establishment.

Soon after the shifting of the Brahmins from Payalur to Vembanand, St. Thomas Church was constructed and consecrated incorporating a deserted and old Hindu temple.

After the Italian missionaries rebuilt the church in the seventeenth century, its appearance elevated considerably and is now a spectacle to behold. The architecture fuses elements from the Hindu culture (owing to its origins) and of Persian ornamental decorations (as India was a Portuguese colony back then).

There is a beautiful relic of St. Thomas installed in the main altar of the church building, which was conveyed from Ortona in Italy at the time of its reconstruction.

'Palayur Mahateerthadanam encompasses long pilgrim walk, much like the Brahmin “yaatras”. The Lourde Cathedral in Thrissur is the starting point for the Mahateerthadanam, from where the participants of the procession walk a distance of about 28 kms on foot to reach Palayur from Thrissur. The pilgrims are known to carry crosses carved in wood while walking. Pilgrims and devotees cover a 30-km-long stretch of the great pilgrimage on foot tirelessly, which is an example of undying faith and devotion.

How to Reach St. Thomas Church

The church is easily accessible via all channels of transportation viz. roadways, railways and airways.

By Road
Palayoor is 28 kilometres away from Thrissur District and it lies on the Thrissur-Chavakad route, via Pavaratty.

By Rail
If one plans to travel by the train, the important direction to remember is that the town lies on the Thrissur-Guruvayur broad gauge line. On road, the distance from the station to the Church is about 24 kilometres.