It is believed that St. Sebastian Church in Thrissur is virtually since the beginning of Christianity itself. It is among the oldest churches in the country. In fact it is believed that this church, located in Palayar, is probably one of the seven ancient churches that had come into existence at the initiation of St. Thomas, considered the Apostle of India. 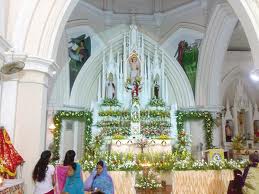 The church was properly consecrated in 52 A.D. So holy is the church considered that the very first Christians who emanated from this church have been designated the ‘Palayar Nasranikal’ a highly revered community among various parishes of devout Christians. These earliest of Christians are also reverentially referred to as the ‘Thoma Makkal’ or even the ‘Rampan Makkal’.

Palayur located in the Kerala area has been virtually considered the cradle of Christianity in India. This is especially so because the region had been blessed by the footfalls of St. Thomas. The village Chittattukara is located about six kilometers East of Palayur.

The village in itself is a haven of natural beauty well ensconced in the green background of thick forests. It is said that at one time there were thick forests for as far as the eye could see. This is also one of the reasons why most of the village names have a component meaning forests. There are Parakkad, Mambaizhikad, Pandarakkad and Thaikkad.

St. Sebastian Church got its name from the patron saint who is the ‘Protector from Disease’. According to a story the people of Chittattukara were ravanged by the evil pestilence of cholera. They were terrified as large communities were being wiped out. The entire parish prayed to their Patron saint for succor. In 1943, on twelfth July, the entire parish pooled in to hold a special feast to honour their saint and express their gratitude for his benevolence. There was remission from the disease and the people were rid of the epidemic. This feast called the ‘Twentieth Day Feast’ has been celebrated ever since to commemorate the miraculous healing powers of St. Sebastian. This annual feast is a great event of piety and gratitude. Devotees contribute liberally to the feast knowing full well that the blessings of their saint would keep them from disease and infirmity.

Earlier when this church had just been initiated the congregation collected around their belief and faith as well as matters related to their worship. It is because of this that the Chittattukara church came to be called the ‘Muthyema’ church. This church finds mention in the travelogue of pliny, the Greek traveler who referred to certain locations as ‘Palur’ and ‘Brahmagara’. Also the renowned traveler Marco Polo mentions the names of Brahmakkulam.

According to the earliest revenue records the previous name of Chittattukara was Brahmakkulam. It had been established therefore on the basis of various records that, the church had been well established long before 1300 and in 1770 the parish of Chittattukara was established. There had been more than a thousand families in the parish. Several missions have visited the church including the Bosian and the Basel missions. The latter Mission has remnants of its visit in the BMEL School as well as the cemetery to the church which can be seen even today.


How to Reach St. Sebastian Church

It is possible to approach the St. Sebastian church through all three modes of travel that is by air, by train and by road.

By air one can land at the Cochin international airport at Nedumbasser and travel to the Church through Thrissur covering a distance of about eighty kilometers in a matter of about ten hours.

By train one reaches Cherthala the nearest railway station and from there travel by road upto the Church. The alternative is Alpazzuha railway station which is around twenty two kilometers away.

By road there is a wide choice as the State as well as the private sector both manages a frequent service from Cherthala to Alapuzzha through Srthunkal. The distance to the church is about twenty two kilometers and takes about half an hour of travel time.