Sports and games are pursued with great enthusiasm in Thrissur. It is true that weightlifting, cricket, hockey, tennis, badminton and athletics are all played with great enthusiasm in the area but nothing beats the football flavour. It has nurtured many a great footballers in the past. The most popular game of the people is football. Thrissur can easily be called the ‘Mecca of football’ in Kerala. This game is the main passion of the people. It is the most sought-after sports activity in colleges, schools and the town as a whole. 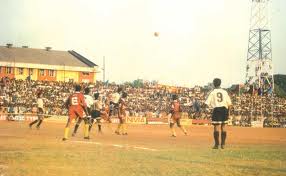 This city has started numerous football events taking them to state and then national level. The city of Thrissur has a highly-developed infrastructure for the games and sports and the football is the primary activity carried on in those well maintained stadiums and fields. N I David memorial trophy, held every year in memory of N.I.David IPS, the former commander of KAP battalion Thrissur is a major event of the area. This is held as an inter-club football at the Thrissur Municipal Corporation Stadium. It was for the first time in the David cup matches that the floodlight was used to play the game. The same is now fully established here.

It is not that other than football there are no other sports in Thrissur. It has the means and enthusiasm for cricket and athletics also. But great players in the past have remained associated with football.

When Kerala hosted the 5th National Games in 2012, Thrissur played a very important part in accomplishing the successful hosting of the same. It was the Venue for Judo and Weightlifting at the Indoor Stadium, Boxing and M&W at the Lulu centre and the Football (women) at the Corporation Stadium.

The city has also hosted several important sports events in the past like National Aquatic Championship, Inter-University Games and Santosh trophy, and David Cup football championship.etc.

Many of the great names in football are associated with Thrissur. The former Indian Football Captain Jo Ancheri belonged to Thrissur. He honed his skills on the fields of Thrissur to play in reputed football clubs like Mohan Bagan, FC Kochin and FC East Bengal. I.M. Vijayan popularly known as the ‘black pearl’ also belonged to this city. The black pearl was crowned with the Indian player of the year in 97 and again in 99. He is known for his fastest ever international goals in SAF Games against Bhutan in 1999. Manjila, another footballer of repute and the captain and goalkeeper of the Kerala state team in Santosh Trophy comes from Thrissur. He represented the state in 71, then from 73 to 76 and again in 79. He achieved international repute by representing India in the President’s Cup at South Korea in 76-and the King’s Cup at Bangkok in 77.

C.V. Pappachan was the main force behind the Kerala Police bagging the federation cup twice. He represented Kerala in Santosh Trophy eight times. The city has made a name for itself by sending at least two star weightlifters of national and international repute. The names of T.V. Poly and V.M. Basheer have brought this fame for their native place.

Thrissur has several high-quality facilities for the training and holding of various sports events. These facilities are governed by the government, the Sports Authority of India, University and trusts.
Infrastructure and facilities for table tennis, cricket, football hockey, softball, basketball, volleyball, chess, carom, athletics and good hockey fields are available for the enthusiasts.

Some of the facilities for training are provided to players and trainees at the stadiums which also hold national and state-level games. Thrissur was in limelight in the last national games in 2012 when its facilities were used to hold several national events. It achieved the highest standards of excellence adhering to rules and regulations and the traditional hospitality of Kerala.

Thrissur has 3 major stadiums for its dream of remaining on the national canvas and holding events of national and international standard of all types but primarily of Football. Two of its major stadiums are fully capable for football event of any level.

Thrissur Municipal Corporation Stadium popularly known as palace stadium is a fully structured facility with Mexican grass in the play area. This 3-story structure runs well established change rooms, VIP lounges, media centre and other facilities for officials and players. Some famous names like I.M. Vijayan the former Indian captain and the famous footballer Ancheri have remained associated with this stadium. The place has been fully renovated and it is now the first stadium to have a synthetic turf in Kerala. It also holds the Guinness World Record for the largest and highest temporary stadium to hold 35,000 spectators. This record was accorded to this stadium when the Federation Cup was held.

VKN Menon Indoor stadium is run by the sports council of Kerala. The stadium can hold events like judo, weight lifting and badminton. The stadium was known as Capt. Hawa Singh Plaza during the games. It was allotted these events during the 35th national games also. The events were very successfully held by the council organisers. The stadium has maple wood flooring and acoustics of international standards. It also has an air-conditioned hall and 10 courts for badminton.

The Thrissur Aquatic Complex is a swimming pool complex run and maintained by the sports authority of India. This is one of the oldest complexes in Kerala and the second complex of the type in India when it was inaugurated in 1987. It was then used for the National Games of 1987.The facilities available in the complex are standard race pool, diving pool etc. It has held some of the very prestigious events so far. These events include national aquatic championship 1991, all India inter-varsity games 1992, 1994 and 56th senior national aquatic championship.

Thrissur has many famous football clubs that regularly pursue the activity. The RB Ferguson club is the oldest football club established in 1899. Aurora club was established in 1947 to become the second oldest in Kerala. Thrissur Gymkhana club is another famous club of Thrissur.