The palace of Sakthan Thampuran is regarded as being one of the topmost tourist attractions in Thrissur and is located in the heart of the city. The palace belonged to the ruler of Thrissur called Raja Rama Varman, who is credited as being the chief architect of modern day Thrissur.

Sakthan was an extraordinary ruler who is said to have been so in love with the city that he went to great heights to turn it into a modern haven, by establishing an efficient administrative rule and maintaining friendship with various key allies such as the Britishers, Mysore king-Tipu Sultan and the Dutch rulers. 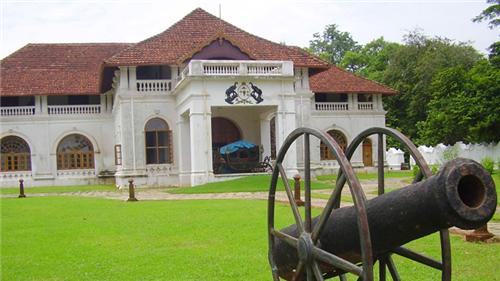 Sakthan is said to have been a devotee of Lord Shiva and so decided to build his palace close to the famous Vadakunathan temple in Thrissur. He is in fact said to have renovated an old temple known as the Vadakkechira Kovilam to turn it into his erstwhile palace which was built according to the Dutch and Kerala styles of architecture. That very feature is what makes it rare and one of a kind in Kerala.

The palace is two storied and has the traditional Kerala Nalakettu which refers to a style of house wherein four halls unite and open up into a big courtyard which does not bear a roof. The palace has roofs that are sky high and palatial rooms which are bound by thick sturdy walls. The flooring here constitutes of fine Italian marble which allows for the insides of the palace to maintain a pleasant atmosphere, regardless of the type of weather that is prevalent outside.

Sakthan is said to have been close friends with Tipu Sutan who was the King of Mysore and a very powerful ruler himself. He very often visited Sakthan and stayed at his palace. He is said to have hoisted his flag at the palace which is still present in front of the palace. It is a very interesting relic and people who have a keen interest in history will enjoy it.

The palace also holds an old serpent grove where the king is said to have worshipped the snakes. The palace was converted into a museum by the government in 2005 and decided to set up a garden that now houses several exotic and rare plants and adds a pop of colour and greenery to an otherwise slightly ashen palace.

That being the southern end of the palace, there is another garden at the northern end that is also lush with greenery.

The palace holds the grave of Sakthan Thampuran along with one of the Samorin of Calicut who was a close friend of the king.

The Archeological Survey of India turned a part of the palace into a museum with due support received from the Kerala Tourism department.

The museum is divided into various sections such as the bronze section, granite section and epigraphy section. As the name suggests, the bronze section houses bronze statues which are said to have existed since the 12th Century and has collections up to the 18th century. The granite section has granite statues that range from between the 9th and the 17th centuries. The epigraphy section displays texts of old written by several kings and rulers.

The various coins that were in use at the time are also on display at the museum. Coins as old as 5th century, that belonged to the Roman empire, are still well maintained here and are said to be made of pure gold. The neighbouring state of Travancore also had several silver coins in circulation back in the day and are part of the museums collection. Various other coins belonging to various other nationalities and communities such as the Mysore empire and the dutch empire are on display here and are presented to the public in a sequential manner.

One can reach the palace by train as the station is located just two kilometers away from the palace.