One of the largest temples dedicated to Goddess Durga, in the form of Bhagavathy, found in Kerala is one of the important places of worship in the state. 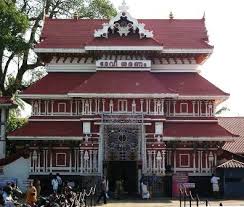 One of the largest and ancient temples in Kerala, Paramekavu Bhagavathy Temple is said to be existent 1000 years ago, during the 10th century.

Devi inside the Umbrella

A popular legend says that once a head of the Nair family, who used to visit the Devi daily, due to his old age decided to quit the temple visits.

On his final visit to the Devi, after seeking blessings from the Devi, he retired on his way to take some rest on his way back from the temple. After taking rest as he lifted his umbrella to resume his journey back home, he realized that the umbrella had got stuck to the ground. A sage passing by told him that the Devi had shifted to reside in his umbrella.

To mark this incident, the Paramekavu Bhagavathy temple was erected.

Goddess Durga is established in the Paramekavu Bhagavathy temple in the form of Bhagavathy.

The Devi was established as the daru silpa or a wooden idol. In 1997, the daru silpa was realized to incur damage and hence was replaced with another wooden idol of the Devi having eight arms in a seated position.

A common belief is that the Goddess from the Paramekavu Bhagavathy temple went to meet the Lord Shiva in the Vadakkunatha Temple.

The Paramekavu Bhagavathy Temple participates in what is known as the “the friendly rivalry,” along with the Thiruvambady temple.

The procession commences with the fifteen elephants from both the rival temples and proceeds towards the premises of the Vadakkumnathan temple.

Both these temples stand facing to each other and compete with each other during the Thrissur Pooram to present themselves as the best in every possible manner; from the decoration to the lighting, and the display of umbrellas and peacock quill on the participating elephants.

How to Reach Paramekavu Bhagavathy Temple

Nearest Airport: Nedumbassery International Airport at Kochi which is 52 kilometers distant from the Paramekavu Bhagavathy Temple, is the nearest.

The Paramekavu Bhagavathy temple is open to visitors from 4 am to 11 am and from 4 pm to 8 pm.