Home city guide our lady of dolours basilica in thrissur

Our Lady of Dolorus Basilica in Thrissur

Our Lady of Dolorus Basilica in Thrissur is easily one of the most beautiful of churches in India and will take your breath away from the get go.

It happens to be the biggest church in India and the third tallest in Asia owing to having some of the tallest of belfries.

The church has a somewhat unique interior and exterior contrast. While the exterior of the church is completely white on the outside and gives away an ashen effect, it is extremely colourful from inside. The outside of the church contains tall belfries that are placed around the main church building. The church was built according to Indo-Gothic style of architecture.

The insides of the church have an amazing collection of murals and many colourful statues of saints and several scenes from the Bible, that are depicted with such impeccable detailing. The roof of the church will remind one of the Sistine Chapel as there are a lot of beautiful paintings that have been done directly onto the walls. It, in fact, has one of the largest collection of murals that a Church in India possesses.

This very church was built in 1814, when the Archbishop of Kodungallur approved for a church to be built for the catholics in the city. It was then approved and constructed and subsequently, the Our lady of Dolorous Church was managed by the Kodungallur Archdiocese from 1814 to 1838.

In 1838, however, Pope Gregory XVI is said to have issued a multi praeclara, which caused for the Kodungallur diocese to stop its functioning. It, thereby, passed on the controls of the church to the Bishop of Verapoly who controlled it until 1861.

Subsequently, more trouble was invited in the form of two Persian Catholic bishops namely Rocos and Melus who are said to have created a divide between the Catholics in the city and, thus, were forced to flee from India. Then Pope Leo XIII is said to have appointed Adolph Medleykot as the first Bishop of Thrissur and divided the Syrian Catholics from Verapoly.

Subsequently, the Catholics had to give up their church and Bishop Vazhapilly Mar Francis decided to have a new one constructed.

He visited several churches from infamous catholic oriented cities such as Rome and other such European cities and upon his return, designed the Church of Our Lady of Dolorus. The responsibility of constructing the church was passed on to a great architect of Jnanaprakasam and it took 11 years for the church to be constructed.

The church was finally consecrated on 24th of November in 1940 by Bishop Mar Francis Vazhapilly and came under the jurisdiction of the Lourdes Cathedral Church.

Pope John Paul visited this church in 1986 which is regarded as a great historic feat. In 1992, cardinal Anthony Padiyara converted the church into a Basilica making it the Basilica of Our Lady of Dolorus.

The church is a must visit for everybody who is on a trip to Thrissur as not only will it fill you up with great religious spirits but the magnificent and colourful interiors will brighten up your day. Every year on the last Sunday of November, a great feast is organised at the church which draws in a very strong crowd, thereby, making it the second largest festival in Thrissur. 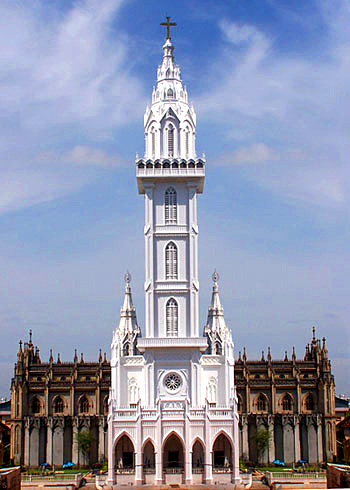 Behind the church lies a tall church tower known as the Bible Tower and happens to be the tallest of such towers in the whole of Asia. Standing tall at a height of 262 feet, this tower is covered in stained glass that contain some of the most beautiful paintings in the world, depicting various scenes from the Bible. It depicts the entire lifetime of Jesus Christ starting from his birth and leading up to the passion of the Christ and his resurrection.