Thrissur, cultural capital of Kerala, God's own country is a home to numerous palaces and museums. It was ruled by several kings and dynasties and, hence, their palaces. The objects that were used by them in that particular era are displayed in the museums. 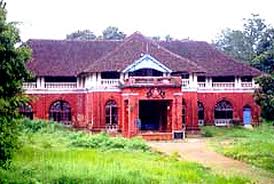 A repository of ancient carvings, jewellery, paintings and sculptures that throw light on the ancient architectural heritage of the state, this museum also contains archaeological finds from the Megalithic Age. Read More

Housed inside the Kollengode Palace, this is the only museum and the first of its kind to host and display murals. Excavated artefacts from the Indus Valley and Harappa Civilizations and the dry palm-leaf manuscripts known as ‘Olagradhangal’ are preserved and displayed here. Read More

Established in 1976 to honour Ramavarma Appan Thampuran at Kumarapuram Palace where he lived, the memorial consists of a vast library with a huge collection of books and journals. It is the only one that has over 7000 bound volumes of magazines dating from 1065.

Vaidyaratnam Ayurveda Museum is a showcase of the evolution and richness of the Ayurveda tradition of herbal medicine. A panoramic exhibit tracing the history of Ayurveda from ancient times to the modern era; exclusive sections on Sushrutha, the physician and his treatises on medicine and treatment, a digital library and a 3-D gallery are the highlights of this place.

Known as Vadakkekara Palace before Raja Rama Varma of the princely Cochin state reconstructed it in 1795 in the Dutch period style. Contains separate galleries for bronze edifices and sculptures dating between 9th and 17th centuries along with Numismatics (ancient coins) and Epigraghy (ancient writings) displays. Read More

This Kovilakkam palace belonged to the medieval kingdom of Kodungallur (known as Cranganore earlier) and housed the royal family of this feudal principality which was subordinated to the rulers of the Cochin Kingdom. During the brief rule of the Dutch in South India Kodungallur had their protection but reverted allegiance to the Zamorins who ruled over Thrissur. The princely dynasty had several scholars, poets and musicians who have contributed immensely to the enrichment of Malayalam and Sanskrit culture and literature. Kerala’s age-old ‘gurukulams’ were centred on the Kodungallur Kovilakkam for many decades.

The Kollengode Palace was built by Vasudeva Raja of Kollengode as a gift for his daughter. This was taken over by the Archaeological Department of the government and converted into a museum. A beautiful blend of Kerala architecture with western design, the palace is a must-see.