Mammiyoor Mahadeva Kshetram or Mammiyoor Temple is a temple dedicated to Lord Shiva and is located very close to Guruvayoor Temple in Thrissur. The exquisite sculptures and the paintings that are displayed on the walls enhance the grandeur and splendor of Mammiyoor Temple. 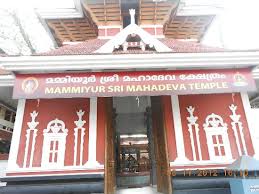 Every devotee who pays obeisance at Guruvayoor temple must also visit Mammiyoor Temple according to the ritual that has been followed since times immemorial. People of other religions apart from the Hindus are not allowed to visit the temple. It is a part of the famous 108 temples in the state of Kerala and is also one among the five Shiva temples near Guruvayoor. The deity of Lord Shiva faces the east direction is in rudra bhava.

Lord Krishna himself had established a very big temple in Dwarka during His reign and had installed this idol. At the time of His swargaarohan, Lord Krishna gave instructions to His devotee and cousin Udhava to install this idol at a safe and sacred place. For this, he had to take the help of Brihaspathi, the guru of Vayu and the Devas. This idol was taken by Vayu and Guru to a place down in the south and installed the idol there. This is the reason why this place got its name, Guruvayoor (or meaning place).

It is believed that Lord Shiva was present here along with His wife Parvathy at the auspicious moment. Since there was lack of adequate space, Lord Shiva moved a little away and gave His blessings from Mammiyoor Temple. This temple is just a ten minute walk from Guruvayoor Temple in Thrissur.

How to Reach Mammiyoor Temple