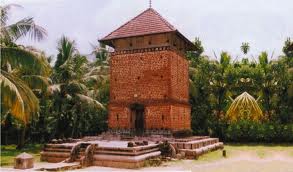 It is believed that the mighty Bharathapuzha River had at one time flowed nearby but it changed its course northwards leaving a distributory towards the southern direction. This secondary, southern river came to be called the Arangotttukara which exists even today but is located about two kilometers from the temple boundary. The temple sits on a hill about three hundred meters high. The temple is located in Thali village which is situated near Thrissur. This temple is one of four temples placed at the four cardinal points. For example in the East is located this Keezhthali Sree Mahadeva temple and in the West lies the Malabar Pazhani said to be the chosen home of Lord Subramania. Then there is the Naduthali Siva temple that has tremendous historical as well as socio-cultural significance.

According to one of the legends, the pond stretched across a vast area of about or even over one hundred acres. The famed one hundred and eight Shivalinga’s had been gloriously installed all around this pond. Once these ‘Jyotirlingas’ had been installed in their respective temples the pond began shrinking. So for it has shrunk to about fifteen acres width at some places and reduced even further to as small as ten acres width in some places.

It is believed that the forest which had surrounded this temple earlier had been in the care of a hermit who had attained supernatural powers with his stoic and strict penance. This sage was the one who finally performed the ‘Pratistha’ or the ritual installation of the temple deity. It is said that the temple has mystical powers because it had been consecrated by the ‘rishi’ or sage.

Due to its ancient status the temple has a special committee in charge of its reconstruction. To consecrate the temple after its reconstruction the ‘Ashtamangalya Prasnam’ an elaborate ritual with several offerings was performed in 2000. A trust which was designated the Keezhthali Shree Mahadeva Charitable Trust had been set up in 2000. The foundation stone laying ceremony was conducted under the reverential supervision of Sampoojya Swami Thridanandji who belonged to the Sreeramakrishna Madom which is a devout order of Lord Krishna located at Puranattukara in Trichur.

Once the work of the ‘Sreekovil’ had been completed and the ‘Punapratishta’ of the huge Shivalingam was done in an elaborate and sacred performance of ritual with a multitude of requisite offering in 2004 during the month of April. The general offerings here are of milk, bael leaves, honey and coconut milk.

The largest festival here is the Mahashivaratri which is celebrated in March every year with great pomp and show.

How to Reach Kheezhthali Shiva Temple

The Keezhthali Mahadeva temple is approachable by air, rail and road.

By air the closest airport is the international airport of Calicut situated close to Thrissur. The distance of about forty six kilometers can be covered easily on hired and state owned road transport like taxis, buses and auto rickshaws.

The nearest railway junction is at Thrissur a mere four kilometers away by road. It takes about half an hour to get to the temple.

There is a fine network of roadways on which there are government-run buses of the state transport as also private taxis that can easily take the tourist to visit and pay obeisance at the temple.