There are only a few rare places in the world where you go and feel like you haven’t seen anything like them before. Kauthuka Park in Thrissur is one of those places. What looks like an earthily, colourfully done-up humble abode at first gives way to such a heady confluence of natural elements, that one wonders if such a thing is even possible. 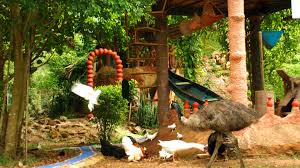 Kauthuka Park is the brainchild of Varkey Veliath, who, with his team of Varkeys (comprising his wife and daughter) succeeded in creating a space that beautifully brings out the innate harmony of nature which most of us claim to believe in, but which hardly any one of us ever has seen. Spread over a sprawling 1.25 acres, the Kauthuka Park, or the “Park of Intrigue”, is a must-visit for everyone who seeks a lesson in co-existence in the most humble and hospitable atmosphere.

It seems as if Mr. Varkey, in the form of Kauthuka Park, has managed to create something of a Noah’s Ark. Here, a large variety of plants, animals, trees and birds are nurtured in surroundings that are as natural as they can be. And the best part? None of the animals in the park are confined, and every creature walks free like it would in its ingenious habitat. Even though the very concept of this park is inviting enough for the inquisitive traveller, the number of attractions at this park is so many, that it’s almost impossible to make an exhaustive list of them. To make our best attempt, however, one must visit it for its confluence of caves and caverns, rare plants and trees, medicinal herbs, trees corresponding to signs of the zodiac, utensils that are as old as time itself, animals and birds whose names you’ve read in picture books and heard in children’s fables, yet never seen, and tree huts and bamboo huts that you have fantasised about in your days of yore.

Innovatively planted aerial trees, arches made of fused branches and intricately done up caves, along with the relaxing cradles and bamboo houses located inside the park add to its enchanting ambience.

A mention has to be made about the hospitablity and warmth one receives from the very moment one enters the Kauthuka. The way to the park is actually preceded by the Varkey Residence, in which him and his wife Leslie, and daughter Reshma decide. What adds to the charm and allure of this place is the fact that there is no staff in his park – since the family considers the Park as their own baby, they give it the love and affection of the same respect and it is them again who double up as staffers and maintainers of the park. It is, therefore, a “single-handed” garden.

Due to its richness in terms of natural species and its usefulness in the field of agricultural and natural research, it has been duly recognized as an important spot of interest by the Tourism Department of the Government of Kerala. School and University students often visit this Park as part of field learning trips, and to further their understanding of nature.

The ideology behind Kauthuka Park is, to say the least, noble. Mr.Varkey was the son of a simple Farmer and had learnt to respect nature in all her glory from his very childhood. As a farmer, his father had given him values that he holds on to even now, and to the extent that they drove him to the ambition of creating Kauthuka Park. His philosophy propagates the belief that as human beings, we’re dependent on nature for our utmost needs and survival. But, in recent times, man has lost this sense of harmony and respect, and acquired an attitude of superiority over nature, which is a sign of sure destruction. In the form of this park, he has managed to bring together the very best that nature has to offer in one place.

How to Reach Kauthuka Park Thrissur

The Kauthuka Park is situated en route to the Athirappally Falls in Potta, in the Chalakkudy District of Thrissur in Kerala. From the Chalakkudy Railway station, the Park is at a distance of about 6.4 Kms via National Highway 47. The nearest Airport to the Park is the Cochin International Airport, located 2 5 kilometers away from the park on NH – 47. The Thrissur Railway station is at approximately the same distance.