Ivormadom Parthasarathy Temple is famous all over the country and visited by many to perform the last rites for their ancestors.

Hindus believe in the Shastras, Vedas, Janmas and reincarnation, etc. Rituals and rites are the very essence of Hinduism and they also strongly believe in mukthi or moksha. One can attain salvation only on his Karmavina during his Janma. It is for this reason, that people from all corners of the country visit Ivormadom Parthasarathy Temple and perform the last rites and rituals for the departed souls or their ancestors. 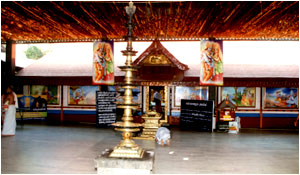 It is believed that Lord Krishna blesses them in the form of Parthasarathy. It is only through his blessings that these souls acquire peace and happiness and ultimately moksha.

Origin and History Associated with Temple

How this temple originated and got its name is quite amazing. The war of Mahabharata or Kurukshetra was fought between the Pandavas and Kauravas and is well remembered as the war between the Dharma and Adharma. During this war, countless relatives and friends of both the parties lost their lives. After the war ended, the Pandavas who survived, performed the last rituals and rites to pay the homage to the departed souls so that they could attain moksha. Although they performed these rituals at many places which are meant for the same but they did not achieve any fruitful results.

Very soon, they recollected the messages sent by their Guru Vedvyasa about this holy place, Bharthaghandam and, hence, visited this place. Once they performed all the rituals, they were finally very satisfied and happy to note that all the departed souls who were involved in the war attained eternal peace or Moksha.

As they felt the presence of Lord Krishna throughout, they built this temple and named Ivormadom (they made and stayed in this temple). It is also said that their guru Vedvyasa supervised the construction of Ivormadom Parthasarathy Temple on the bed of River Bharatha Puzha.

Located on the foothills of Thiruvilwamala near the river bank of Nila or Bharatha Puzha, this renowned and sacred temple is enshrined with all the holiness and offers serene atmosphere. This small village that houses Ivormadom Parthasarathy Temple is visited by hundreds of people from different parts of the country to offer obeisance to Lord Krishna and performing the last rites and rituals of their beloved ones.

Lord Shiva, Ganapathy, Ayyappa, Mahalakshami and Naga are the updevas present in the temple along with the main deity of Lord Krishna.

Lord Krishna’s birthday, Ashtami Rohini is celebrated as an annual festival in this temple. Several spiritual programs and art and cultural programs are performed during its celebration.

Offerings made at Ivormadom Parthasarathy Temple