The Holy Cross Church in Mapranam, in Thrissur, is a Catholic Church, which, as it appears, is older than time itself. Constructed over a millennium ago, in the year 928, this church was conferred the status of a ‘Shrine’ under the Diocese and a Historical Pilgrim Centre by the Govt.of Kerala in 2008. Since then, it is referred to as the Mapranam Holy Cross Shrine. 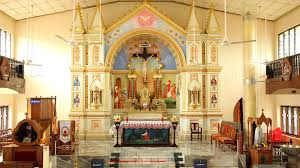 Although the church, a part of Irinjalakuda Diocese, has been in existence for over a thousand years, its full glory was retrieved was restored only in 1989. The Holy Cross Church is reputed to be one among the oldest and most important Catholic pilgrim spots not only in Kerala, but all of India and abroad. The facade of the Church reflects structural semblances of the three most popular Indian cultures – Christianity, Hinduism and Islam.

What makes this church stand apart is the fact that out of the very few and numbered churches across Asia to receive authentic relics related to Christ’s crucifixion. These relics were donated to the church in the years 1887 and 1888 from the Holy Vatican by the order of the Pope Leo XIII. The three relics include a part of Christ’s sacred Crucifixion Cross, remnants of the Holy Cloth employed to clean Jesus’ face by Veronica, and the Holy Blood of Jesus Christ.

But the relics aren’t all that the Church has to offer to the many devout pilgrims that visit it. The shrine is known all over for its major and celebrated Mass Candle-offering ritual. It is held annually and is called “Thirithelikkal”. The candles that are offered during these celebrations are nothing short of gigantic – their weight ranging from a quarter of a kilogram to a whopping 300 kgs, and some of them are of the bigness of a full-bodied human being. During this ritual, nearly 500 huge candles and over a lakh ordinary candles are lit. The Limca Record book lists a candle made here weighing 1,079 kgs and possessing an enormous length – that is to say, a whopping twenty two feet, as the largest candle of the Indian subcontinent.

This very ritual and practise of lighting larger-than-life candles at the church has won it a prestigious Guinness World Record and two Limca Records.

The most important ritual of the shrine is the Exaltation of Cross, celebrated every year from September 12 to 15. The feast in Mapranam is celebrated with much pomp and grandeur. The most important day of the feast is the 14th on which processions with the Holy Cross are taken out, a cultural programme is held and fireworks light up the sky.

It is because of these unifying celebrations that the Shrine attracts visitors irrespective of their religious beliefs.

How to Reach Holy Cross Church

The Holy Cross Shrine located in Mapranam in Thrissur.

From Thrissur, the shrine is at a distance of 20.1 Kms by road. Following is the shortest route to follow from Thrissur to the Holy Cross Shrine: Head south on Thrissur-Shoranur Road towards Kodungallur - Shornur Rd/Swaraj Round N/State Highway 22, and then take a left from Cute Apparel onto Kodungallur - Shornur Rd, and taking another left at Azmathulla Textiles onto State Highway 22, reach the Shrine in Mapranam.

Best Time to Visit: Mid- September, when the Exaltation feast is being celebrated