The Guruvayur Shri Krishna Temple is the most important of all sacred places for Hindus in Kerala. The temple is dedicated to Lord Krishna, referred to as Guruvayurappan in the town, who is an incarnation of Lord Vishnu, the Supreme Hindu God. 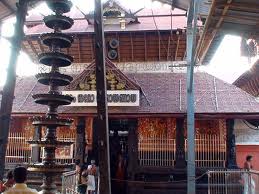 The Shri Krishna Temple (Guruvayurappan Temple) located in Guruyaur Town in Thrissur is one among the five most famous temples of Lords Krishna and Vishnu in our country. Therefore, it falls in the league of temples like the Jagannath Temple in Puri, Odisha, the Tirupati Venkatachalapati Temple of Andhra, and Gujarat’s Dwarka Temple. Guruvayur is a municipal town in Thrissur District of Kerala and is known for its prominence in the realm of Hindu temples. The Vaishnavite culture is so strong in this town and the temple, that the entry of non-Hindus is banned in its premises.

The Guruvayur Temple is aptly the lifeline of its town, and besides its rituals, there isn’t much else that takes place here. There are, however, a number of other temples in the area, but the centre of attention is undoubtedly the Shri Krishna Temple.

The Guruvayur Temple is the Bhulokha Vaikuntha” by devotees who believe that the temple is the place where Vishnu dwells on the bosom of the Earth. The Temple deity is Lord Vishnu (although he is worshipped as Lord Krishna) and a lavish idol of him is installed at the center of the temple for devotees to worship and make offerings. The four-armed idol of Shri Krishna bearing a conch-shell, the Sudarshana disc, the mace, and his symbolic flower in his four hands respectively is elaborately adorned with holy tulsi (Basil) garland, pearl necklaces and other precious jewels. It is in this radiant image that the Lord blesses his devotees and grants them prosperity. It is because of this idol, which is similar to the one found at the Krishna temple in Dwarka, that Guruvayur temple is referred to as the “Dwarka of the South”.


Festivals at Guruvayur Temple in Thrissur

Temple rituals and poojas are looked after by the Tantris (high- priests) and the Melasanti (Chief Priest). Owing to its religious importance, all pooja routines are adhered to rather strictly in the temple. A tantri remains in the temple at all times to ensure nothing hinders the puja ceremony from being conducted on time, or without proper order. The ritual begins with anointing the idol of Shri Krishna in til oil every morning. He is then sprinkled with a special cleansing powder made of herbs known as “vaka”. Then, the Melasanti takes the Holy Water of the Temple, consecrates it with mantras and then pours it devoutly over the idol for his ritual bath. The holy water is then distributed among the devotees, who drink it at once as it is to possess miraculous healing properties.

Stringent rules for dressing exist for people who want to pay a visit to the Guruvayur Temple, and are expected to be adhered to sincerely. The prescribed code is a mundu for males, with an optional veshti. For women, no western garments are allowed. They can either wear a sari or a salwar-kameez or salwar-churidar. They can also wear the traditional long skirts and blouses. Young boys can enter the temple wearing shorts, but even for them, wearing a shirt is prohibited.

Unlike North Indian tradition, devotees are not required to veil their visage in the vicinity of the temple.


How to Reach Guruvayur Temple in Thrissur

The town of Gurvayur is very well-connected to all important towns in Kerala and Tamil Nadu through private and state transport. This temple town is situated at a distance of 29 kilometers from Thrissur. Guruvayur town has its own railway station and there are a number of trains connecting major towns that run here. Frequent passenger trains to and fro Thrissur can be availed. However, the Thrissur Railway Station, at a distance of approximately 27 kilometres, is a more convenient option for outstation pilgrims and tourists. The closes International Air Port is Cochin International Airport at a distance of 80 Kilometres on the State Highway 61.