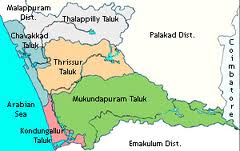 The hillock on which the city is situated provides for natural drainage during the heavy monsoon rains. The volume of rainfall can be estimated from the fact that the foothills of the hills are virtually water locked and have been declared as a natural wetland habitat. Beside this vast natural drainage system the city, however, is dotted with a number of ponds, streams and rivulets. The drinking water supply of the city comes from the Western Ghats.

Thrissur is situated on the 10.520N 76.210E latitudes and has a gradient of about three hundred meters. The highest point of this region is called the Vilangan hills. The natural wetlands at the foothills attract a large variety of birds the major concentration of which flocks to the wild life sanctuary called Peechi Vazhani.

This city of Kerala experiences a three-month-long summer that starts in March and ends in May. After summer comes the wet and humid season of the monsoon that lasts for the four months of June to September. The monsoon retreats during the months of October and November. Therefore, the region seems a long rainy season that is wet and humid. No wonder the entire area is so green and healthy because it is fresh air promoting.

The winter is cool and breezy. It lasts from December to February making for ideal weather conditions for adventure sports like treks, bird watching camps and such activities. The annual rainfall on an average is 2500mm. the temperature fluctuation all through the year is between a minimum of thirty three degrees Celsius in the summer and a minimum of twenty degrees Celsius in the winter. This temperature makes for ideal weather to visit the natural bounty of Thrissur.

The humidity, however, is quite intolerable during the months from April to October. Nevertheless because of the breeze flowing in from the Western Ghats the weather is pleasant and can be made comfortable with a daily regimen of work and bathing. The Western Ghats, the Arabian Sea and the hilly terrain merging gradually into the Palakkad plains, as well as the presence of backwaters called the ‘Thrissur Kole Wetlands’ create an exceptional natural niche that is rare to find anywhere else on Earth. These natural wetlands are unique because on the surface they are rich and green but they are resting on a substratum of rock. These rocks are visible on the surface as well. The Thrissur city, in itself, has a large number of undulating rocks present on the surface.

Geographically, the city of Thrissur is largely made up of the Achaean period’s rock types of gneisses and schist’s that were generally crystalline. Most of the river beds stand testimony to the presence of such rocky particles.

Thomana wetland in the Thrissur Metropolitan Area has the maximum number of migratory birds visiting this region all through the months of August-September to February- March. The unique combinations of igneous rooks, the presence of which, in Thrissur is because of volcanic activity that may have taken place in ancient times. This fact makes the Thrissur area prone to seismic activity or minor earthquake. More than 20000 varieties of birds visit this wetland and its has been renowned the world as one of the most sought after bird watching areas.