The Thrissur food is celebrated the world over these days. Due to the tremendous tourist influx in recent years not only have the residents of Thrissur begun serving up a delectable repast but their own eating habits have changed. Dosai, Idli, Poori, Chapati along with tea and coffee. Fish and tapioca form a large part of the diet of the people of Thrissur. Another staple additive to the daily food is the utilization of large quantities of grated coconut as well as coconut milk. Most of the dishes are prepared with the vital ingredients like of fragrant spices found in abundance in this region. Cardamom, ginger, black pepper, cloves and cinnamon to name a few. 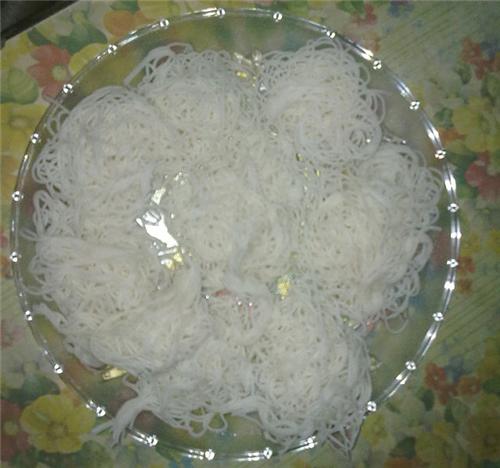 Some of the more famous breakfast dishes of Thrissur are the Idiyapams and the Vellayapams besides popular snacks like the Achappam and the Kuzhalappam. The process of making achappam has been refined into a fine art. The base material is rice flour batter which is slightly sweetened. Specially designed iron moulds are used for making different designs of achappams. Hot oil is put on the heat and the iron mould dipped in the hot oil. Once it's coated with hot oil, the mould is dipped in the sweetened rice batter. Almost immediately they are taken out of the batter and then dipped again in the hot oil. Because of the heated oil the rice batter gets cooked and leaves the mould.

The beautifully shaped achappams are taken out golden and crisp. They are a tasty and delightful snack for all ages, whether old or young. Some are even coated with frosted sugar. The vellayappams are a melt-in-the-mouth treat commonly sold among the tourists visiting Thrissur. One place where one can get fresh Vellayappam easily is the residential area near the Basilica of Our Lady of Dolores. Most of the residents here have the necessary skills and have made the cooking and production of Vellayappam a fine-tuned art. While the Thrissur cuisine is largely non-vegetarian there are a number of dishes that are purely vegetarian. Almost each of the small housing outlets is a retail outlet for selling fresh achappams.

Among the most popular eating joints in Thrissur is the Indian Coffee House. It has, in fact, become the part and parcel of life in Thrissur making it the epitome of the city's culture. Located at Swaraj Round in the Mangalodayam building, the Indian Coffee House branch of Thrissur is the oldest one in Kerala. It was established in 1958 by the Indian Coffee Board Working Cooperative Society. Most of the eating places serve both vegetarian and non-vegetarian food but there are certain restaurants that are situated on the India Gate at Palace Road. These eating places are famous for their delectable dosas in a large variety of tasty versions which border on the exotic like jam, cheese and cashew fillings. There are also some places that are specialists in North Indian food. One of them is the Navratna Restaurant which is located on the Round West.

For those willing to experiment with the expansive variety of multi-cuisine outlets there is the Hotel Sapphire which is located on the Railway Station road as well the Pathans Hotel situated on Round South. Both these eating places are quite popular for their delectable biryanis and quick-fix meals besides excellent hygienic food as well as some delicious sweets that are typical of Thrissur magical cooking that laces everything with the inevitable coconut.

Thus, Thrissur has a special place for the foodies who delight in the preparations. The specialty cooking is further accentuated by the unforgettable aroma of spices and dry fruits. The tourists are enticed to visit this natural niche again and again.

The Kavitha Restaurant and Bar is another multi-cuisine outlet frequently often by locals and tourists alike.

Hotel Alukkas is a vegetarian and non-vegetarian food serving outlet that has both Indian and non-Indian cuisine being served.

Bimbis is a fast food joint serving up both south Indian and Continental snacks.