For a city so rich in culture and history, it is natural for it to play a host to a multitude of festivals and Thrissur does just that by celebrating various festivals. Be it a Hindu or a Christian festival, it is serious business for the locals who immerse themselves neck-deep into the celebrations and participate in each festival, with equal passion, year after year.

Let's look at these festivals in detail. 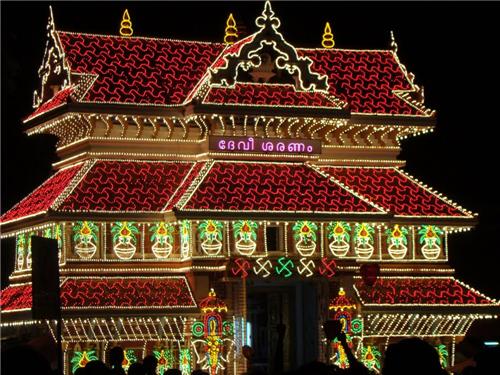 Although Pooram is said to have existed as a prominent festival since a very long time, Raja Rama Varman is believed to be the first person to have started the celebration of Thrissur Pooram on a grand scale.

Back then, the existing pooram festival known as the Arattupuzha Pooram, was celebrated at the a small place called Arattupuzha that was situated quite close to Thrissur. According to the legend, the various temples from Thrissur would visit the festival every year without fail, and take part in the festivities. One year, however, due to the occurrence of heavy rains the temples were unable to make their way to Arattupuzha on time and when they finally made it, they were forced to miss it as they were not allowed to enter the town. Angered by the incident, they decided to visit the king of Cochin, Raja Rama Varman and asked him to deliver justice. A man of decisive nature, he quickly decided to visit the Vadukunathan Temple which is situated in Thrissur and ordered to make arrangements for the the temple for Pooram. And in a move to unite all the various temples, he invited all of them to bring in their deity and celebrate the Pooram being held at the Vadukunathan Temple.

This tradition is rife to this very day and thousands of people and hundreds of elephants participate in the celebrations every year.

The festivities last for 36 straight hours and include the carrying out of the various processions through day and night. Here is a look at the various rituals.

The Koodiyattum refers to the hoisting of the various participating temples’ flags which are hoisted on a special pole. This flag hoisting takes place one week before the main festival. Although only Brahmins are allowed to take part in the flag-hoisting ceremony, the resident carpenter who is made in-charge of erecting the flag pole is the only non Brahmin to enter the temple and perform the bhoomi pooja.

The festival is organized in a very systematic manner and everybody has to stick to a set schedule. The 36-hour festival starts at the Vadukunathan Temple where the other temples bring in their deities which are then taken out on a parade.

Before the start of the festival, a big firework display takes place and add in the much preferred colour and sound extravaganza.

On the day of Pooram, the festivities begin at 6 in the morning in the Paramekkavu Temple.

The Laloor Temple is home to the famous Shree Karthiyayini Devi and happens to be the first temple to hosts its flag. The procession then proceeds to the Ayyanthole temple that houses the idols of Lord Shiva, Naithalakkavu Amma, Sri Durga, Shastra, Ganapathi, Anthimahakalan, Rashasu and Dampathu Rashasu. They hoist flag at about 11 in the morning and it goes on till 11.15. The next temple to hoist their flag is the Thiruvambadi Temple who hoist between 11.30 and 11.45.

Next the Paramekkavu Temple hoists the flag between 2 and 2.15 am. The Chembhookavu Temple hoists between 6 and 6.15 pm who are joined in by the Kanimangalam Temple at the same time followed by the Panekkumpilly between 6.15 and 6.30 pm and the Pookattikkara hoists it at the same time. The Choorakottukavu and the Neithalkavu temples are the last ones to hoist their flags between 6.45 & 7 pm and 8 & 8.15 pm respectively

Hundreds of elephants take part in the celebrations every year and are all heavily decorated from head to toe in traditional caparisons.

The festival finishes off with the bursting of more fire crackers. 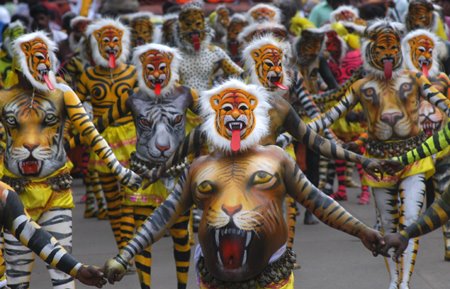 The festival takes place in the month of August and although it is celebrated with various practices and rituals that are followed uniformly throughout Kerala, the city of Thrissur has a unique spectacle to offer.

On the last day of Onam known as the Naalam Onam, Thrissur witnesses a sort of folk art known as Puli Kali. Thrissur prides itself as being the cultural capital of Kerala and this art form adds in an extra tinge of colour, sound and creativity to the festival.

The art form revolves around several men dressing up as lions and tigers and parading on the streets to entertain the crowds. Puli Kali translates to play of the tigers and is a befitting name as the men paint themselves as tigers and wear masks on their faces.

Every year, several men sign up to play the role of tigers and lions; each of the mask is hand painted by expert artists who manage to fit in an impeccable detail onto every single person. They use skin-friendly paints and enamels but it is a rather tedious process. The entire process of painting one person takes several hours to complete from start to finish, thus, causing for everybody to start their day quite early.

Owing to the large number of men who take part, they are all divided into groups and together perform dances along with prancing, stalking and attacking each other like real tigers. They are accompanied by musicians who play loud music to get these men to act like wild animals. There are a couple of other men who dress up like deers or hunters who the men dressed as tigers hunt down or are hunted down by, respectively. These acts are thoroughly enjoyable and draw in crowds by the thousands, including a large number of tourists.

The event takes place on the roads leading up to the Swaraj Round which is situated in the middle of the city and close to the Vadakunathan temple. These men then offer their prayers at the temple and finish off the day by parading around the ground. 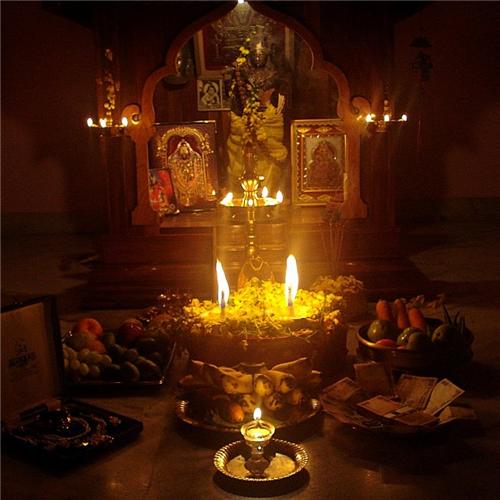 Vishu refers to equal in Sanskrit and is meant to signify the equinox. It is supposed to be a very auspicious day for farmers to start sowing the seeds of their crops. They also harvest their previous crop and offer it to the gods before using it to make a feast.

Vishu is also considered to be the new year according to the Hindu calendar and, thus, people buy new clothes for themselves and gift each other presents as a goodwill gesture. A large number of firecrackers are lit at night which fill up the sky with bright colours.

Christians form a vast majority in the town of Thrissur and it is home to one of the biggest Catholic Diocese in India. It contains 205 parishes in all and 52 stations that are part of the archdiocese. More than 4,70,000 people constitute the Malabar Catholics in Thrissur and, therefore, Christmas is celebrated on a large scale every year.

On 27th December 2013, Thrissur played a host to the biggest Santa Carnival in India when 5,000 men all dressed as Santas were joined in by 2,000 little girls all dressed as angels, paraded down the streets of Thrissur. There were 25 tableaux which were part of the parade and a strong crowd of 10,000 upwards took part in it. The entire parade started at the Sacred Hearts School and ended at the Saint Thomas College and lasted a good 3 long hours. Several live bands played at the event and prizes and chocolates were given away to the participating Santas and angels.

Masses are also on Christmas held at all the various churches. 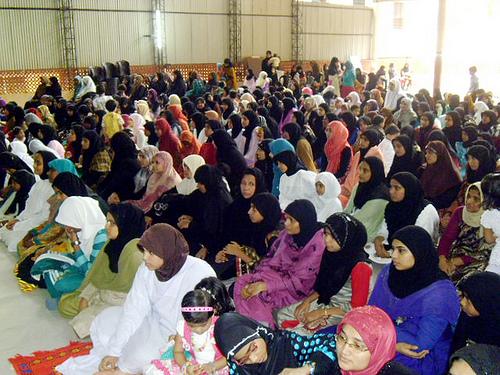 Thrissur is home to a vast Muslim population and, thus, the Eid ul Fitr and other Muslim festivals are celebrated in a grand fashion every year. Eid ul Fitr translates to the festival of breaking fast.

There are several eidgahs that are present in the city with the most popular one being the one at city centre. On this day, many people offer zakat which is the urdu word for alms and they believe that offering it to the poor will result in them attaining salvation.

Explore more about Culture of Thrissur