Thrissur, being the cultural capital of Kerala is home to numerous churches. Each one of them is a spectacle in itself and has a wonderful history attached to it. 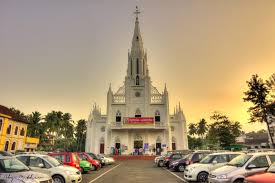 Our Lady of Lourdes Metropolitan Cathedral

This imposing Syro-Malabar Catholic Church is a masterpiece of Indo-European architecture and design; the underground shrine is a popular tourist attraction. In 1986 during Pope John Paul II’s visit to India, this church celebrated its centennial year of existence. Read More

Our Lady of Dolorus Basilica

Counted among the largest churches in India, its inspiring Gothic-style architecture with soaring belfries, double-storeyed aisles and eleven altars are imposing.

Belonging to the Archdiocese of Thrissur, this church located at Ollur caters to 4000 families considered to the richest and most influential in the parish.

This church’s tower is the tallest in India as well as Asia and is topped by a shining red cross to indicate the strong presence of Roman Catholicism in Thrissur. The tower holds wood carvings depicting the birth and childhood of Jesus Christ, stained glass paintings of his healings and brass work showing his numerous miracles. The sufferings endured by Christ are shown in beautiful oil paints along with murals of the life and history of St. Thomas, terra cotta figurines of the apostles and lastly Christ’s resurrection on canvas, all of which are masterpieces that stay in the mind long after the visit.