If your idea of a perfect holiday is clear sea water, the sound of waves, a blue sky looming in the background and coconut tree shadows falling on the sand, then you should look no further than the Chavakkad Beach in Thrissur, Kerala. 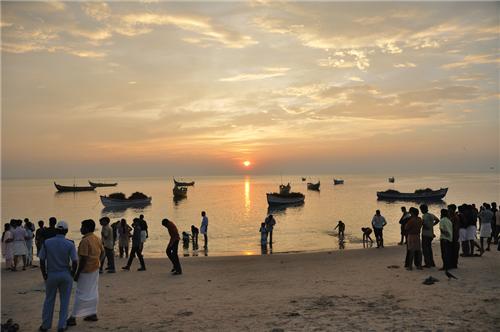 The beautiful Chavakkad Beach is one of the most well-known beaches in Thrissur and Kerala. It looks out into the vast stretches of the Arabian Sea, and is in fact famous for its estuary, also known as the “Azhimokam” in Malayalam. An estuary is a geographical structure in which a river opens out into the sea. The confluence of the two water bodies against the serene backdrop of Chavakkad is a sight worth beholding. Located close to the Commercial Capital of Kerala, Kochi, the Chavakkad beach in the Chavakkad Taluk is also an important commercial centre.

This beach is, needless to say, extremely popular with domestic and international tourists. The reason it draws such a huge crowd, in addition to its natural beauty, is its convenient and strategic location close to the Shri Krishna Temple in Guruvayur (less than 5 kilometers), which invites a lot of pilgrims and devotees to its sands as well.

Chavakkad beach is, to say the least, mesmerising. One can simply gaze at the horizon standing on the beach with the soft sand under his feet, and spend moments of utter peace and tranquillity. Its shore is fringed by beautiful coconut shadows that line the circumference of the beach. What can be a better time than time spent looking at the sunset on the beach, while sipping on tender coconut water? Many people visit the beach to experience just that, as the tourists will observe themselves when they go to Chavakkad.

Such an appeasing and relaxing atmosphere gives the beach an idyllic universal setting. It draws obviously then, that, when it comes to choosing a fun-filled, all encompassing picnic spot, Chavakkad is the first choice of many Keralite families.

Another very interesting feature of the beach is its culture of fishing. In fact, fishing is the main commercial activity of the Chavakkud Taluk, and the activity it is well known for. One can often spot fishermen enter the waters and spread their vast nets to harvest good fish.

Other than the pristine waters and marine activities of this virgin beach, the Chavakkad has another side to it, which is in actuality a large stretch of farm land! This stretch of land is named Ramachapadam, after the Ayurvedic Herb Ramacham that is grown here. The Ramacham grown here is famous for its high-quality oil which is used for manufacturing perfumes and medicines. Its medicinal properties include its ability to cure “jwara” (fever), and quenching severe thirst.

What’s more, to add a little extra bit of exotic to the beach, the beach at Chavakkad is visited by thousands of migratory Siberian Seagulls every year, which alone is a spectacle worth beholding.
There are installations of breath - taking and creatively crafted murals around the beach, owing to its proximity with the Guruvayoor Devaswom Institute of Mural Painting. In addition to the natural wealth of the beach, these man-made murals further accentuate the beauty of the place.

How to Reach Chavakkad Beach in Thrissur

Chavakkad is located at a very convenient distance from Thrissur. In fact, it is only five kilometres from Guruvayoor, the booming township of Thrissur District. On road, the distance from Thrissur (Railway Station) to the beach is 33.3 kilometers, and it can be covered in an average of about 45 minutes via the Thrissur Kanjani Vadanappally Road and Edapally – Panvel Highway. An alternate route that takes about the same time is through Poovathur – Amala Nagar Road. Based on the traffic conditions at the time of travelling, either of these routes can be chosen. Cochin International Airport is the nearest (80 Kms) to Chavakkad beach, and all Domestic and International flights are available from here. Guruvayur Railway Station is the nearest station to Chavakkad Beach. The line comes from Thrissur Railway Station and terminates at Guruvayoor. There are two passenger trains to Ernakulum Railway Station and one passenger train to Thrissur Railway Station. Buses and autorikshaws are easily available.