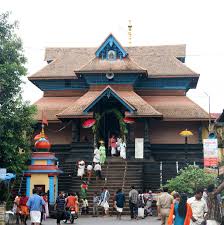 Aranmula Parthasarathy Temple in Thrissur is one of the five main temples among the most ancient edifices pertaining to the Mahabharata. It is situated on Pampa River’s left bank and plays a significant role in the devotional rituals and functions of the pilgrims to the region. The other Mahabharata related temples of the region are Yuddhistra’s Thrichittat Temple located at Chengannur and the strong Bheema’s Tiruppuliyar temple. Then there is Arjuna’s temple at Arammula and Nakula’s temple is the Thiruvanvadoor while Sahadev has the Tirukkadittaanam temple.

The devotees can enter into the temple by climbing eighteen steps of a stony stairway into the eastern tower. The northern tower has the pilgrims descending over a flight of fifty seven stairs into the cool waters of the Pampa River.

The temple has a tremendous extravaganza of water sports. Every year there is a race of the famous snake boats.

According to legend the Pandava princes had set up these five temples when they were on a pilgrimage after they had crowned Parikshit as king. Arjuna’s choice of grounds for building his temple was Nilaackal near Sabarimala. The idol was transported on a raft that had been built with six pieces of bamboo. This incident has given the place its name of Aranmula or six pieces of bamboo. Arjuna offered prayers at this temple. It is said that these prayers were offered by Arjuna to atone for the sin of having killed his older brother, King Karna and that too when he had been disarmed.

Another story goes that Lord Vishnu had given the Gyana or wisdom and knowledge of creation to Lord Brahma when the Madhukai Tapa asuras or demons had stolen the Vedas or virtually the codes of conduct of the Hindus.

According to yet another story it is believed that Arjuna had refused to slay Bheeshma the great warrior despite all the coaxing and requests of Lord Krishna. Finally, in anger, Lord Krishna summoned his ‘Sudarshan Chakra’ or discus which was his weapon of choice. Seeing his anger, Arjuna persuaded him to not to take such a drastic step. The idol of Lord Krishna was enshrined in Aranmula temple as such. The shining discus can be commemorated in the Aranmula mirror’s reflection even today.

Even the snake boat race has a story of origin. It is believed that a hungry pilgrim had been fed by someone on the banks of the Pamba River. He indicated that food should be sent to Aranmula. Later people came to believe that Lord Vishnu himself had given the message.

A similar story goes about the owners of the land of and around the temple. It is said that every year during the harvest the paddy was measured under the supervision of the landlords. A poor hungry woman stood by in the hope of obtaining some grain as alms. However, there was a great furor when at the end of the day the old woman was found dead due to starvation. Apparently the landlords had misfortune befall them immediately and found that on astrological reading that they had been cursed by the Gods because they had allowed the hungry old woman to die despite having so much grain. Later it was decided that every year on that day the eldest member of the Brahmin household would fast on this day. A grand feast is given on this every year to feed the public.

The snake boat race is held at the temple every year. The objective is to commemorate the legend of taking food to the temple. The sacred boat carrying the food is at the centre while the side boats from thirty nine ‘Karas’ or race boat groups participate in the race for about two hours. Each of the snake boats comprises a hundred rowers and twenty five singers and four helmsmen. The entire length of the boat is a hundred and three-feet long.

Another colourful festival is the Kandavanamdhanam which takes place in the Dhanus month of the Malayalam calendar. The huge historical fire of the Kandava forest is replayed every year. The bare area in front of the temple is decorated with dried plants, leaves and twigs to duplicate the forest. Then the fire is lit. There is feasting and festivities all through the preparations and the culmination of the festival. Meenum month of the Malayalam calendar has the procession of the Parthasarathy image which is depicted riding on the Garuda all the way to the Pampa River. This image is joined by the image of Goddess Bhagavathy which is brought from the Punnamthode temple to celebrate the Aratlu festival.

Then there is the Thiruvonam festival that has the heads of the Brahmin households owning the lands of the temple fasting while the entire land participates in the feasting sponsored by these very households.


How to Reach Aranmula Parthasarathy Temple

By train the nearest railway station is the Thrissur terminus. It is at a distance of just about four kilometers and can be reached in a matter of minutes. The total time taken is just twelve minutes.

By road the temple is easily accessible from the nearby places as there is an excellent network of roads.

The nearest airport is the international airport at Calicut which is at in easily motorable distance.