A luxuriance of religious diversity accompanied by a bounty of cultural extravaganza is how best the city of Thrissur can be described. Located in the heart of Kerala, it was originally known as Thirusivapperoor and later by its anglicized name - Trichur, which was given to it by the britishers. Now home to a large population of 1,854,783 people, Thrissur takes the 20th spot in the list of largest cities in India.

Being the fourth largest city in Kerala, Thrissur is influenced by various religions such as Christianity, Hinduism, Jainism, Buddhism and other European religions which cause it to become a conglomerate religious entity.

It holds a great economic threshold in Kerala and is home to several big companies and also headquarters a handful of major league banks.

Several tourists throng to the city every year, to take in its natural splendour and be one with its colorful people and lavish festivities.

It is also the centre for education and several schools and universities find their home here, with Thrissur having a whopping 97.4% literacy rate.

Thrissur is known as the cultural capital of Kerala and is home to literary geniuses, world famous musicians, profound dancers and also hosts South Asia’s largest alternate film festival. One visit to the city will tell you of how stupendous a job the locals are doing in up keeping the culture and heritage of this beautiful city.

Thrissur is said to have housed humans right from the stone age. Several monoliths that are easily 3 million years old are present in many parts of Thrissur and serve as proof of this very fact. They are now under the custody of the archaeological society of India and considered to be important pieces that have helped in tracing the roots of the various sects that are now part of Thrissur.

Years after the passing of stone age and when full fledged civilization had arrived, the city served as a linking point between India and the rest of the world. Trade took place from here as the city served as India’s key port. A royal family had begun to form here who ruled the city until the Zamorin of Calicut arrived. Later, the nampoothiri community took over the reigns of Thrissur and slowly began to seep into every aspect of the city, until the Dutch invasion occurred in the 16th century. The royal family with the help of the Dutch managed to reclaim their city and it flourished under their rule.

Modern-day Thrissur came into being during the reign of the ruler Sakthan Thampuran, who was better known as Raja Rama Varman. His love for the city made him build his palace there and was also responsible for modernizing the city, by taking a keen interest in its development. He is now known as the chief architect of the city and has several of his statues erected at various public places in Thrissur.

Thrissur is economically quite advanced and in fact, a large part of Kerala’s economy comes from this very state. It is home to many entrepreneurs, who own big multi-national companies that rake in a substantial amount of money. Thrissur is also the headquarters of banks such as Dhanalaxmi Bank and Catholic Syrian bank, which have existed since a very long time, as a result of several catholics and Brahmins who constituted a majority of the population in the city, since the time of king Rama Varman.

Thrissur is a beautiful city that has lots of natural water bodies such as rivers, lakes and ponds. It is placed on a hillock called the Thekkinadu Maidan which causes it to remain quite cool, due to its elevated position.

The soil in Thrissur is very fertile and people here grow Paddy and Tapioca. Plentiful coconut trees are grown here as well and coconut oil industries flourish in Thrissur.

Lying close to the coastline, Thrissur experiences tropical climate. It gets average rainfall during the month of May and heavier rains appear after the month of June, which continue till the month of November.

Temperatures soar during the summer months where it can reach as high as 35 degrees due to the high levels of humidity.

Winter months in Kerala are cooler, with temperatures reaching as low as 20 degrees and 22 being the average temperature. 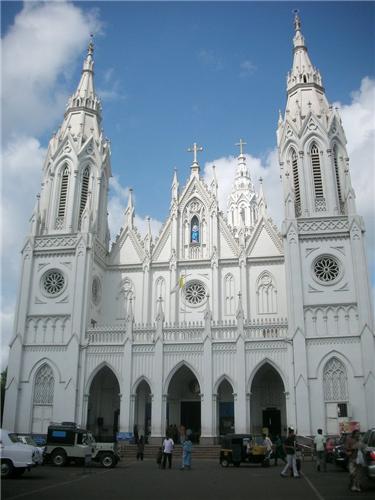 This wonderful city, plays host to many spectacular monuments such as churches and temples which are architectural masterpieces. Being placed on the coastline, water bodies are located at every nook and corner of Thrissur and these help in maintaining a serene atmosphere. Tourists pour into Thrissur by the hundreds, and consist of a good mix of foreigners and local tourists, who hail from the world over and the rest of India, respectively.

From the get go, one will feel an immense connect with nature in this part of Kerala as not just the water bodies but the lush greenery that is still well preserved here, will open up your lungs and jolt your enthusiasm to explore the rest of the city.

The following are the major tourist attractions in Thrissur:

Shopping malls are aplenty in Thrissur and the state is famous for its silk shops and gold jewellery. There are various local markets here as well which sell traditional Keralite jewellery, textiles, garments, footwear, etc.

Thrissur is also famous for its unique artifacts. From brass curios to handcrafted decorative pieces, they make for great souvenirs for you to take back home. No trip to Thrissur is complete until you buy yourself a Kathakali themed Souvenir! 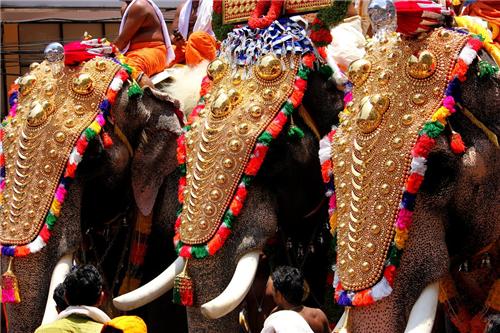 As was mentioned earlier, Thrissur is a cultural hub and home to various religions and traditions. That in turn causes several festivals, which span various religions, to be celebrated with much pomp, year after year.

The on-going Pooram festival that takes place between April and May, is regarded as being one of the biggest festivals in Kerala, where a multitude of people and elephants gather to take part in daily processions and offer prayers to two goddesses viz. Durga and Kali. Colour and sound play a big role in this festival, where people in brightly coloured clothes, colourful umbrellas and heavily decorated elephants all parade down the streets of Thrissur and are joined by the traditional Panchavadyam players, who play loud music to entertain the crowds.

The festival of Onam, however, is the city’s biggest festival and is celebrated in the month of August and is a four-day festival dedicated to Lord Mahabali.

Other festivals in the city include Christmas, Eid and Vishu (Malayali new year) that are celebrated with equal fervor. But given the celebratory atmosphere that is ubiquitous in Thrissur, it feels like everyday is a festival here.

Thrissur is famous for its ayurvedic medicines. There are several ayurvedic colleges here which are famous to have produced some of the best of ayurvedic practitioners. These medicines are said to be more powerful and effective as compared to english medicine and are therefore much preferred by the locals. They are also exported to other countries as there is a huge demand for the same in foreign markets.

Thrissur is a state that has seen the rise of a sea of poets and renowned authors of several best selling books and novels. These people have been in existence since the very foundation of Kerala. There are various famous establishments here which encourage literature, folk art and other such creative enterprises. These are as follows:-

These institutions have helped Thrissur in becoming the literary capital of Kerala.
Many famous authors find their home in Thrissur including Sukumar Azhikode, Mullanezhi, Kovilan, P. Bhaskaran, etc.

Food plays an important role in any city’s distinctive make up. Thrissur too has several cuisines, that are exclusively served in this city alone. A type of string hoppers or rice noodles are famous here and is served with a sweet or savory coconut broth. Thrissur is also famous for its seafood dishes and a variety of chicken-based dishes. When in Thrissur, your taste buds will experience a galactic high, once you savour its unique cuisine.

How to Reach Thrissur 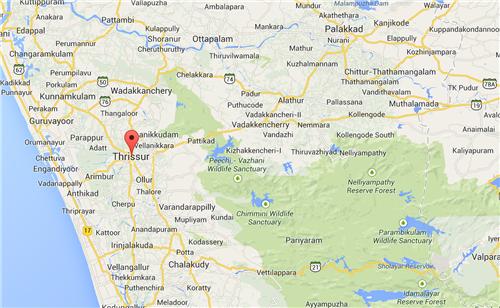 Thrissur is accessible by rail, road, bus and air. It is well connected and can be reached easily from any part of the country.

The Cochin International Airport is the nearest airport to Thrissur and is located 55 kilometers away from the city. Direct flights to various metropolis such as Bangalore, Mumbai and Chennai are available from here. International flights from here go to several middle eastern countries and various Asian Countries as well. People can also opt for the Calicut Airport or the Coimbatore airport to access Thrissur.

The NH47 that passes through Thrissur is the main link to various cities such as Salem, Pallakad, Coimbatore and Kochi. Buses are available from most of these cities to Thrissur and it is always the best way to travel since the route by road to Thrissur is very scenic and passes through several lush green forest areas.

The train station here runs trains to various cities in and around Kerala and also to many cities in India. They are operated by the Southern Railway Zone of the Indian Railways. Train routes are especially busy during the summer months owing to it being the travel season.